How long have you been living in the community?
Since 2011, so 8 months.

What house do you live in?
Sunwood

What workshops do you do? (Which one do you like most)?
The bakery, the garden and the cafe. I probably like the cafe the most, because of the customers and because it’s like a real job.

What activities do you do (like evening class of painting)?
I don’t do them.

What responsibilities do you have in your house?
Making breakfast, on Saturday I clean the fridge and on Tuesday I do kitchen night, I also help with cooking.

What do you do at weekends?
I visit my girlfriend, I buy a lotto ticket and a TV guide and just relax doing computer work.

Would you like to share anything else with this newsletter?
No
Alex Fox
Posted by Camphill Community Milton Keynes at 00:37 No comments:

I have doing a beekeeping course with the North Bucks Bee Keepers’ Association and have learn' t lots of things about bees.
Bees have been kept for honey production quite successfully in earthenware pipes, straw skeps, wooden boxes and all types of hives. The most popular type of hive in the UK is the National hive and consists of a roof, crown board, super (chamber were bees store honey), brood chamber (were the Queen lays all the eggs), entrance block and the floor.
There are three different types of bees in a bee hive. The majority of bees are workers (sterile females). They collect nectar to make honey. A worker bee’s lifespan can be as little as five weeks and as long as six months. Drones are distinctly bigger than worker bees and don't sting unlike worker bees. The drones are male and get to fertilise the Queen bee although they usually die when they have mated with the Queen bee. The Queen bee has a longer body than the worker bees and lays all of the eggs for new bees in the bottom of the bee hive. She can live for up to five years.
The Queen bee who is fertilised by drones lays all her eggs on frames of wax in the brood chamber at the bottom of the bee hive. Honey is also stored on these frames of wax in the brood chamber. Honey is also stored in Supers (or upper chambers).

The waggle dance is the figure-of-eight dance bees use to communicate good places to forage.

Swarming—The biggest reason for bees to swarm is overcrowding. If a colony gets too big for the hive the queen will lay eggs in special queen cells, then leave the hive with about half of the workers to find a new home.
The remaining workers will look after the developing queen larvae. The first one to emerge will kill the other developing queens, then a few days later will go out on a mating flight with the drones. On her return she will take up where the old Queen left off.

Some of the pests and diseases bees can get are:
Varroa - a debilitating blood sucking mike which is about 1.7mm long.
Nosema - a micro-organism that a lot of bees carry which can cause dysentery when the bees are stressed.
CHALK BROOD - leaves mummified, chalky larvae in the brood frames were bees keep the young and is not considered serious.
FOULBROOD - a serious bee disease which comes in the form of American Foulbrood (AFB) or European Foulbrood.
https://nbbka.org/

On Monday 2nd July 2012, residents and co-workers had a land day at Camphill Milton Keynes. There were groups of people who did weeding, clearing litter and making the gardens around the houses look nice. It went on all day and the only other workshops were the Cafe and the Bakery. I took lots of photos.
People did weeding in the paddock and around the gardens   in the community. We also cleaned up any grass, leaves or old branches from trees on the estate. The weather was not great; it rained for some of the day although the grounds around the community look a lot better. I did not take part in much of the maintenance since I got quite stung in an accident on a bee keeping course I took part in the day before.
It was a great opportunity for everybody to get together in groups since there are so many people living in the community. 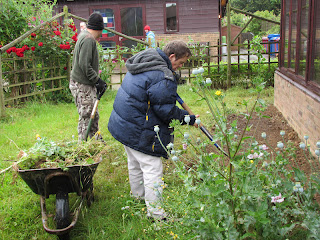 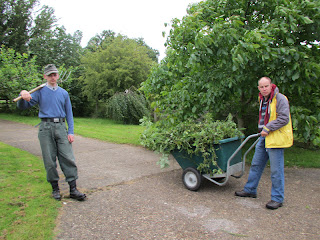 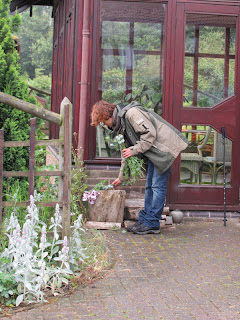 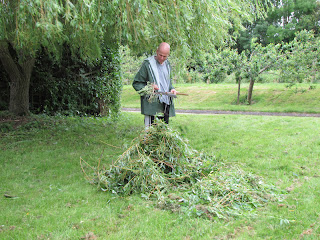 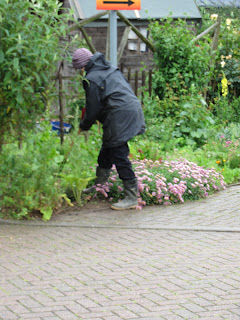 On 11th May 2012 Rodrigo, Kim, Stuart Gregory, Anthony and I went on a short holiday to Cornwall near Wales. We stayed in a small cottage. We had to do all our own shopping as it was self-catering. The owner of the cottage had a place next to ours.  On the way there we stopped off to visit Nick Jackson and Joan Platford who used to live in Camphill Milton Keynes.

We had a few days so we went to the beach although I did not go into the sea. We took a ferry to visit Plymouth and Stuart, Kim and I went on a big wheel ride. We also went to visit Matthew Jackson who is at university. He is Nick Jackson’s and Joan Platford’s son.
We also had meals out at the pub and also went to a restaurant that cooked local food and had a nice waitress.
We went back to Camphill Milton Keynes on Tuesday 15th May. I thought that the holiday was fun and think that the community should do more short holidays.